President Obama implemented the Fiduciary Rule, which was supposed to go in effect next month. In short, it says financial advisors and salesmen had to put the interests of their clients ahead of thier own interests. In other words, it outlawed blatantly ripping off your clients. Trump came in and halted this, basically ensuring that it will still be legal to put your bonus pool's interest ahead of you client's interest. Cue in Goldman Sachs and Morgan Stanley. They have pulled off the heist of the decade, essentially selling 200 million digital tokens (they're calling them stocks) with no voting rights at a trailing P/S multiple of 60x and forward multiple of 20x for a startup losing half a billion per year, with said losses increasing over $200M Y-o-Y. This is almost the ultimate in reward free risk 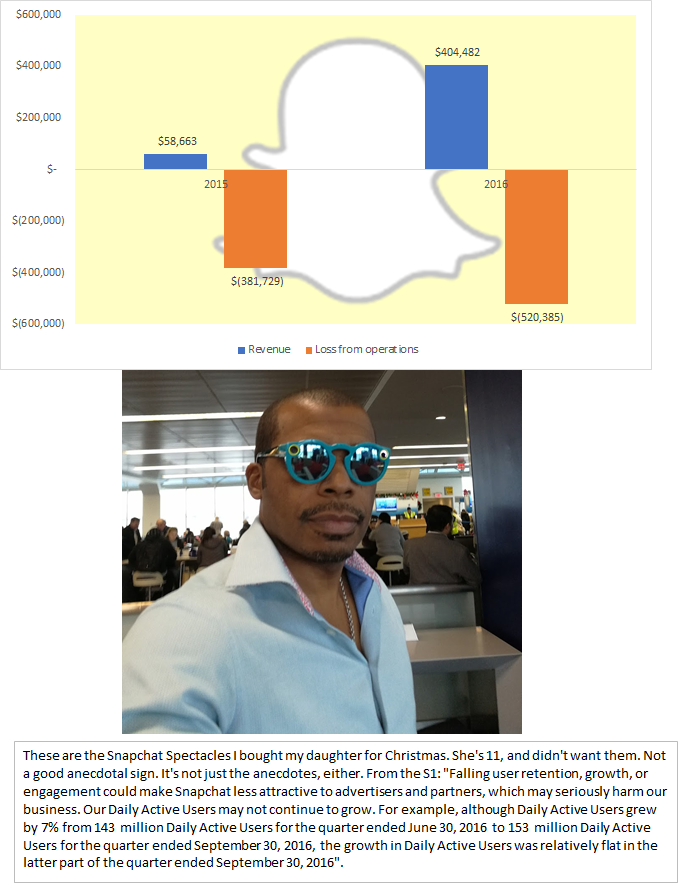 you basically take the risk of a venture capital investor, get the protective covenants of... Oh yeah, there are none, and the reward of... who knows, it's a startup! Oh yeah, you get the returns of venture capitalists as well, right? Wrong! You don't have control or voting powers in the company at all.

At 200 million shares, Snap raised $3.4 billion and was valued at nearly $24 billion as of its pricing. CNBC reported investors were expectinga pricing of $17 to $18 per share, above the $14 to $16 per share range originally given by the company.

The IPO is 12 times oversubscribed. Let me repeat this, 12x oversubscribed. That's how bad... Im sorry, good, Wall Street is at convincing people to want to through their money into the vast unknown. 12 buyers for every share for sale!. ed. Some managers told CNBC they got as little as 2 percent of what they were asking for.

Goldman has done this before (but they've outdone themselves with this Snap thingy), referenceFacebook Registers The WHOLE WORLD! Or At Least They Would Have To In Order To Justify Goldman's Pricing. I was absolutely right then, and math (or common damn sense) dictates I'm right now. The difference is... Facebook was making money, at the fop of its sector and growing like a weed, but still half the valuation of Snap! To be precise, FB generated 7x the revenue of Snap at its IPO and was easily profitable, and had no close competitors - and was still drastically overpriced at IPO. Snap is literally for suckers and sheep. Good luck, fellas! You're gonna need it, particularly as we're at the top of the business cycle (as compared to being at the bottom at Facebook's overpriced IPO.

The macro cycle is not the only thing that should concern those who fell for this deal. Snapchat's growth is slowing already!

As reported by CNBC, this is the CEOs explanation for said slowdown:

""I think broadly speaking if you look at rest of world growth as a proxy for Android, you can start getting an understanding for the performance issues we face on Android in the last two quarters … [Snapchat] Memories worked very very poorly on low-end devices, largely because of the way we were caching images. The best way to get an actual feel for that is to buy a $100 Android on Amazon and play with the app. That will give you a more qualitative understanding of the issues we face on lower end devices. We've been investing a lot in fixing that and we actually changed the way we develop our products. So in the past our design teams used only iPhones … Now we transitioned half the design team to Android.""

Ok, but that doesn't really justify the slowdown. As a matter of fact, there are plenty of holes in that story. Here's a couple:

Wait, it gets deeper. Later on the CNBC story, others have corroborated what I see as a bogus excuse, to wit:

When contacted for this story, Mark Cuban elaborated on Spiegel's answer in a direct message: "Makes perfect sense. It's an image driven app that can overwhelm lower end devices. But that's fixable."Another hedge fund investor, who attended the event and requested anonymity due to private nature of the meeting, agreed."It's a fair excuse because low end Android development is known and well covered problem given fragmentation and given those devices are less engineered for high quality video," the person said.

Moral to the story, be wary of Mark Cuban and anonymous hedge fund investors backing of "alternative facts" explanations of slowing growth at the top of the business cycle when non-voting shares are sold at what has to be a world record valuation for a start-up company that loses half billion dollars per year, with said losses increasing by roughly $200M per year.

If semi-annual or annual subscribers desire a valuation of SNAP to determine where to go long or short, let me know via tthe BoomBustBlog contact form. Click here to subscribe - we give discounts if you spread the word through social media.

00:10:57
Views: 1587
My Thoughts On Risky Assets Such As Real Estate, Digital Currencies and Gold in times of Pandemic